The following story is from The Old Car Nut Book Series

Hello. My name is Bud Worley and I'm an Old Car Nut!

It all started in 1955. By the time I was fifteen years old, I had already been bitten by the car bug and was seriously infected. At this point, I'm sure it's a terminal disease. I've had many cars over my life and my 1956 Chevrolet Nomad is probably my last car. In my mind, you have to ask yourself, where are you going to go after a Nomad? But, that's just my thinking.

At that unwitting young age of fifteen, when many young guys are thinking about sports and girls, I was already focused on cars. I had $100 and used it to buy a 1946 Ford Tudor with a stock six cylinder motor and a beautiful black and rust paint job. Today, it would be considered a highly prized patina. Back then, it was just old paint and new rust.

I couldn’t get my driver’s license until I was sixteen but, that didn’t seem to be much of an issue for me, because I went ahead and drove the old Ford on the sly. Man, was I slick; right up to the point where the Bremerton police chased me down and questioned my good judgment. By the time I got done with the judge, I was restricted from getting a driver’s license until the ripe old age of sixteen and a half. Of course, at fifteen, it seemed like forever and the worst possible penalty one could be subjected to.

Fast forward to the day I did get a driver’s license. Now, it was time to start cruising for chicks! I fell in line with all the other cruisers and played my role in what has become a favorite American pastime.

My intentions have always been good and I was not overly mischievous as I was growing up, but I was a red blooded American male and taking a little risk was part of the game of life.  The driver’s side glass on my ’46 was cracked and I knew where there was another old Ford with the right glass sitting in a field, apparently considered junk.

I had two friends that did nothing to discourage me from going and taking the glass and instead encouraged me and escorted me to the field to procure it. The owner of the junked car didn’t appreciate the liberties we were taking and called the cops. Caught again! This was getting old and I discovered a penalty worse than not getting a license. I got to spend time in “Juvie” and it was a well learned lesson. I made the decision to buy any parts I needed from then on out.

I developed a love for what are called the Shoebox Fords. From 1949 to 1951, Ford really got it right and I went through about four of them. I didn’t customize them or hot rod them. I just loved and drove them. First came the 1950 convertible and with the top down and the wind blowing through my hair, I was riding on clouds. A couple of 1949 Tudors filled the gap between the convertible and the 1951 business coupe with its short passenger compartment and deep trunk. It’s hard to say which one I liked the best because, I loved them all.

In about 1960, I found a new passion in the form my first 1955 Chevrolet Bel Air two door hardtop. It was a great car, as it was, but I wanted to make this one more personalized. It came with the stock 265cid V8 and a Powerglide automatic. I had several changes in mind and so I pulled the car into a one car, dirt floor garage and set about converting the running gear to something with a little more power and added a manual transmission. The motor was a 283cid bored out to 292cid with a four barrel carb. The automatic shifter on the column was converted to manual and I got pretty good at banging gears.

Under the supervision of my uncle, who did interiors for a living, I reupholstered the Bel Air in stock fabric to match the light turquoise solid body paint job. It was a great looking and running car and it earned me lots of attention from the girls and motor-head guys, as well.

As an active member of the Handlers Car Club in Bremerton, I was part of sponsoring the drag races at Bremerton Raceways and did a little racing for fun and got that bug out of my system.

I bought two new cars in my life. The first was a 1965 Impala SS that I paid a little less than $3,000 for. While not a lot of money now, as an apprentice meat cutter at Safeway, it was more than I had and so, it was also the first car I bought on time. That Super Sport had a 327cid V8 and a four speed transmission. It was a fun car to drive and with the Sequoia Green paint, black vinyl roof and black bucket seat interior, I thought it was as gorgeous as it was fun. The ’65 Super sports have gained popularity in recent years, I think, because more people are realizing what I knew way back then. They’re cool!

I had entered what I refer to as “the three year mentality” when it came to buying cars. At the end of the three years, I had paid the ’65 SS off and traded it in for a 1968 Impala SS that came with a new roofline for Chevrolet. Instead of the fastback roofline, my new Super Sport came with what they called a sports coupe. It was more squared off and gave it a distinct look. I have to admit that I liked the ’65 much better than the ’68.

Like a lot of young hot rodders chasing chicks, I actually caught one. Once married and starting a family, I had to leave the classic car lifestyle behind me. However, as many know, I was not done. Fast forward to the mid ‘80s and a friend invited me to go down to Hot August Nights. I was overwhelmed with all of the cars and came home, infected once again, with the classic car bug.

I found a 1948 Chevrolet four door sedan that had been gone through and was an absolute beauty. Normally, a four door would not be in the cards, but it was a great second car for the family. This was not your mother’s four door sedan. It had been lowered and sported Fiesta hub caps. The motor featured Fenton Headers and it sounded real sweet driving down the road. It had a gorgeous blue paint job and the interior had been restored to new. It was a fun driver and I was hooked on classics once again.

In about 1989, I went to a car show called “Return to Renton” with a friend that was looking for a car to buy. A guy at the show told him about a 1956 Chev Nomad that was for sale in South Seattle and so, we went to look at it. It was in fairly good condition, with a new red and white paint job, but needed a lot of work to make it a road worthy driver. My friend said “It’s cool, but I’m not interested. It’s more than I want to do!”

I looked at it with a completely different view. I saw it as a diamond in the rough, sitting in its garage with a rebuilt 265cid V8 and no transmission, waiting for SOMEONE to do SOMETHING to it! I guess you could say it spoke to me. I had to have it!

The owner wanted $10,000 for it and I negotiated him down to $9,500 because he didn’t have a transmission for it. Finding one wouldn’t be a problem and I had time to scout one out. I felt I had really made a score. There was just one hitch in my get-along. I didn’t have $9,500. I gave him a $500 deposit with the understanding that I would sell my ’48 as quickly as possible and finish the transaction. He was amiable and so I advertised my sedan in Cruisin’ Magazine and started telling everyone I knew that the car was for sale. Too much time went by and I had no buyer for the ’48 and started to panic.

I went by the seller’s place a couple of times when I had some extra cash to give him and finally expressed my fear, saying that I hoped he would not sell the car out from under me. He chuckled a bit and told me that he wouldn’t do that. “We shook hands!” he said and put my fears to rest. Years ago, there was an article in Nomad Post Magazine called “Nomad on a Handshake” that recalled this very transaction.

Well, I still hadn’t sold the four door Chev and so I dropped the price and kept giving the Nomad owner more money as available funds allowed. I thought I’d told everyone I knew that the car was for sale, but one day a co-worker, upon finding out I needed to sell, said to me “I know this car. My neighbor built it. I’ll buy it!” I immediately had visions of getting the Nomad home when he interjected that he’d have to check with his wife. I figured that was the end of that and went back to wondering when this drawn out car business would come to an end. Well, she gave her “permission” and the guy has the car to this day.

That was over thirteen years ago and I still have the Nomad, as well. It has become a car that everyone in the local car scene recognizes and knows is mine and while it is always a loyal and worthy driver, I continue making upgrades each year. It still wears the same paint job from back then with minor cosmetic repairs to panels, as needed along the way. I’ve always been fascinated with Nomads and I will always own this one. It is my last classic car.

I will forever be involved with the classic car scene and I am a proud member of The Hot Rod Hall of Fame, having been inducted in 2008 with some of the finest people I know. Besides the Hall of Fame, I currently am a member of six car clubs, including the NW Chevy Club, Rainier Classic Chevy Club, the Chevrolet Nomad Association, Goodguys, the Rogues Car Club, the Baloney Car Club and the Handlers Car Club. 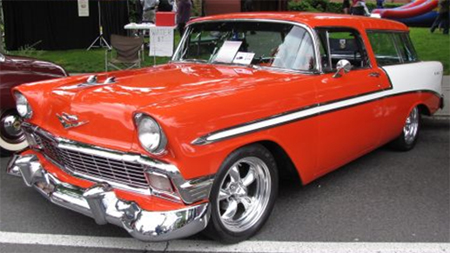 The Chevrolet Nomad Association is a worldwide organization that meets annually and in July, we will be heading for Sacramento in the ’56 for this year’s gathering. The Rogues Car Club dates back to the ‘60s and the Handlers Car Club, formed in 1956, has been promoting drag racing events at Bremerton Raceways, one of oldest facilities in the United States, for over half a century. The Baloney Car Club got its unusual name when an announcer at a car show called Joe Bellotti “Baloney” by mistake. It stuck.

When I gather with my car friends, I am in my element. Very rarely do you find someone in my social circles that are not examples of how we should all be. Supportive, caring, gracious and giving are words that come to mind. I love old cars and old car people. For me and many others, it’s a way of life.