Gary Meadors, Hot Rodder and Founder of
Goodguys Rod & Custom Has Passed Away 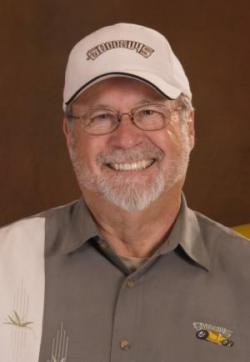 Gary Meadors, founder and chairman of the Goodguys Rod & Custom Association, died Sunday of natural causes. He was 76.

Driven by his passion for family, hot rods, cool cars and good people, Meadors touched the lives of millions of car enthusiasts with his vision and enthusiasm for all things automotive. With his high school sweetheart and wife of over 50 years Marilyn riding shotgun, Meadors founded Goodguys in 1983 in Northern California then branched out to stage a national series of hot rod and custom car events beginning in 1987. What started as a passion-based idea blossomed into one of America's premier automotive event production companies in Goodguys. Today, Goodguys Rod & Custom Association has a worldwide membership of over 70,000 people, and promotes 21 hot rod and custom car events that attract millions of visitors each year. The Goodguys Gazette, the official magazine of Goodguys was first published by Meadors in 1989.

A son of a farmer, Gary grew up in California's Central Valley in the tiny town of Dinuba. It was there he discovered his love of custom cars, tricking out his first rod; a 1947 Plymouth when he was just 16 years old. The first requirement was that it sit way down low - a Meadors calling card. To get it to sit just right, he "cut the coils" removing a few inches from the factory coil suspension springs - a common practice in 1950s era hot rodding. It was the very first in a long line of hot rods and custom cars Meadors built and collected, the most recognized of which was his bright yellow 1932 Ford Tudor. The popular Ford hi-boy sedan, as drawn by artist Thom Taylor, has served as the centerpiece of the Goodguys logo since 1987.

While his professional life as a traveling salesman in the 1970s and '80s consumed his days, Meadors spent his spare time dreaming up ways to have fun with cars and to spread his love and passion for hot rods. In 1973, the Nor-Cal Early Iron Car Club - a club Meadors helped create in Fremont, California - organized the first "Street Rod Mini Nationals" at the Lodi Grape Festival Grounds. More than 500 hot rods attended, and it inspired Meadors to move forward as a promoter. Just a few years later while working as a regional event director for the National Street Rod Association, Meadors would develop the Western Nationals in Merced, California, into the West's signature event for vintage street rods and customs attracting thousands of them with the rallying cry "Motate to Merced."

When Gary and Marilyn quit their day jobs and launched Goodguys as their own association in 1987, the Western Nationals became the Goodguys West Coast Nationals and was moved to its current location at the Pleasanton Fairgrounds. The event will celebrate its 30th anniversary in Pleasanton next August and is known as the "Crown Jewel" of all Goodguys events nationwide due to its propensity to attract the top cars and personalities in contemporary hot rodding. The Danville Dukes, a car club Meadors co-founded with Tom Walsh and the late Bill Burnham in the early '80s, has played a pivotal role in the West Coast Nationals.

As Goodguys grew as an association with popular events anchored in cities such as Pleasanton, San Diego, Des Moines, Iowa, Columbus, Ohio and Scottsdale, Arizona Meadors successfully developed and sanctioned vintage drag racing events in California and Indiana, adding them to the Goodguys event tour. Historic events like Bakersfield's March Meet were resurrected to flourish under Goodguys' direction and care. A speed demon himself, Meadors gained membership to the prestigious Bonneville 200mph club in 1994, when he drove the Dozier & Hegarty Chrysler powered streamliner to a top speed of 223mph.

Like the vintage drag races, AutoCross regained prominence under the direction of Meadors and Goodguys. In 2008, Goodguys began staging AutoCross racing competitions at select events, giving event participants the opportunity to "flog" their hot cars and street machines on a timed course, offering a thunderous sizzle to the shows. Today, AutoCross is held at 16 Goodguys national events offering five classes of competition, a season-long points series and year end Championships.

A true visionary, Meadors was instrumental in encouraging and publicizing young hot rod builders, often helping them launch their careers. In 2000, Meadors and Goodguys spearheaded the development of the Trendsetter award - a perpetual honor presented at the SEMA Show in Las Vegas to rising young hot rod craftsmen. Chip Foose was the first recipient. Other recipients have included Troy Trepanier, The Ringbrothers, Troy Ladd, Dave Kindig and many others.

In 2009, Gary and Marilyn Meadors decelerated a bit from the day to day operation of Goodguys, appointing their youngest son Marc Meadors as company president. With the company flourishing under Marc's direction reaching new generations of automotive enthusiasts, Gary was afforded the time to do what he enjoyed most - taking a cool car out on the open road. Together with Marilyn and their dog Whitewall, they have crisscrossed America dozens of times these past few years, meeting new friends along the way as they lived out their dream and singular vision to have fun with cars.

All told, Gary's life was enriched with deep personal relationships and hot rodding milestones. He is enshrined in the Street Rod Market Alliance Hall of Fame, Hot Rod Industry Alliance (HRIA) Hall of Fame, and is a recipient of both STREET RODDER Magazine and the HRIA's "Lifetime Achievement" awards. In 2014 he received the International Show Car Association's "Legends of Hot Rodding" award.

But the ultimate award for Gary Meadors, was being able to share his love and passion of cool cars with others and bring people together. It's truly what made his tires turn.

He is survived by his wife Marilyn, brother Craig, sons Marc and Marty, grandchildren Breann, Grant, Grace, Reece and Rory.