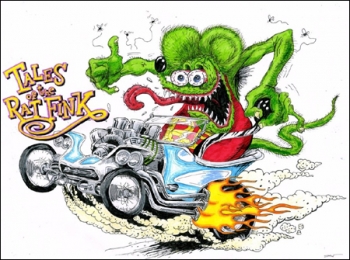 Probably the most fun I've ever had on a road trip was in the mid-1960s when some friends and I went to Salem, Oregon for a car show. It started out kind of odd. I borrowed the Toppers Car Club two wheel trailer and loaded my Deuce Coupe on backwards so that the weight would be properly distributed. That is an invitation to disaster if you ever have a flat tire on the freeway. With it being a two wheel trailer, it could have gotten upside down pretty quickly. But, being young and dumb we didn't know the difference. We were towing it with a '54 Pontiac station wagon.

There were no incidents on the highway. The trailer and coupe followed along just the way they were supposed to, but once we got down there and as I was trying to walk around the trailer in the dark, I banged my shins up pretty good on the trailer hitch. That was a little bit of a setback, personally.

One of the first people we ran into down there was Ed Roth. He was trying to back a trailer with his "Surfite" on it, hooked up to the back of a hearse. "Surfite" was a genuine surfer's car. Under its unique custom surfboard carrier body was an Austin Mini Cooper chassis. Ed tried to get the car in a movie that he heard was being filmed in Sportsman's Cove in Malibu, and even though it was only a split second, "Surfite" made a brief appearance in the 1965 movie Beach Blanket Bingo.

So, he asked me to help him park the trailer and I did. It was one of those things where you're yelling... "Stop... Stop... Wait... Hold it... Stop!" Well, he backs into this guy's car and says "You got to learn not to mumble, boy!" This was typical Ed Roth as I came to find out.

So, we got all settled into the show with everything unloaded and were saying goodnight to Ed when he started walking over to the hearse. I asked, "Are you sleeping in that thing?" and he says, "Yeah. Nobody's gonna bother me in a hearse!" So, we said, "No, no, no, no. We got this big room and we're having some cots brought in and we're all going to share this area." So, we talked him into joining us and he came and spent the night in there. Well, the next night, we decided we were all going to go out and went to a variety of restaurants in Salem, Oregon and of course, Junior Nelson wasn't 21 and everyone was trying to buy a drink. A waitress would come over and ask him when his birthday was and he'd stammer and say he forgot. They'd throw us out. Pretty typical deal, kids with fake ID. He had Bob Ewing's ID and it didn't work at all.

Toward the end of the evening, we ended up at a bar with sawdust on the floor. We should have realized that the sawdust was there to catch the blood and the beer and we were the only palefaces in the place. It turned out that it was an infamous Native American drinking establishment. The waitress comes over, leans in to the group of us and says, "If I were you, I'd leave now." So, we decided to leave. We almost got out the door and Ed, being Ed, spots a Lucky Strike vending machine with a picture of Mitch Miller on it, a fellow with a goatee that was a pretty famous band leader back in those days. He turns around and starts trying to convince a bunch of drunken Indians that that's his picture. Not a good thing...

We got out of there, somehow, and the next day in the Oregonian newspaper there was an article about somebody getting shot to death in the parking lot right after that and we were hoping that the guy didn't have a goatee.

That was my first introduction to Ed Roth. We spent a lot of time with Ed at that show and away from that show. We got to know him pretty well. He would order the most bizarre foods in a restaurant. The first time I really noticed, he was eating Chicken Chow Mein and washing it down with a lime milkshake. Come to find out, he didn't have any taste buds. He couldn't taste, so he was going for texture and temperature.

Another thing that Ed shared with me that many people don't know has to do with his nickname. He didn't like the nickname "Big Daddy" when a promoter at Revell tagged him with it. Apparently, the boys at Revell didn't think the name Ed Roth was exciting enough to help sell models of Beatnik Bandit, Rat Fink, Drag Nut, Mother's Worry, and Mr. Gasser. He had signed with Revell for the model kits and he told me that once things started to take off, he didn't mind the name at all and truly embraced it.

Ed played everything up as much as he could for shock value. He liked to get up in the morning and go straight to the car show and start air brushing tee shirts and dealing with the little kids and stuff. He was a guy that was driven. We'd go out and ride around in the Pontiac station wagon after the show was over and as we were driving down the street, he'd start yelling "Wow! Look at that house! Go around the block, Dick, go around the block!"

So, of course, I went around the block and it was a Catholic church and he was just going off about what a cool house it is. I was just speechless. So, I didn't say anything. I thought, "You can't possibly think that's some dude's house." I just kept my mouth shut and kept driving. But, it was a lot of fun and a great road trip what with meeting Big Daddy Ed Roth and getting to know him.

In later years, I helped him show the Druid Princess and some other things. Junior Nelson and I became good friends with him and when he was going to be in the Northwest, he'd call and invite us to spend the day with him. We had a good relationship and I really miss Ed. He was a real character!

Ed shared a lot about his dad and about engineering. He took a ballpoint pen and the back of a show flyer one time and drew out a picture of a three wheeled motorcycle with an aluminum Olds V8 in it that he intended to build and he did build it. They used to race it in the dry river beds down in L.A., the concrete basins. He was just a real wild guy.

So, meeting Ed on this trip to Salem, Oregon made for a really fun trip. You just never knew what he was going to do next. What was on or what was off... you never knew if he was putting you on or if that was really the guy underneath all that showmanship. But, that was one memorable road trip for us.

We got bored one day and Ed had a striping brush and his air brush set, so we took the car and went down to the True Value store and bought a pint of Glidden white enamel. As a gift, Ed pinstriped the dashboard of my car. What an artist! He just got in and got to it. His artistic talent was really obvious and to watch him was an incredible experience. The hardest thing for most pinstripers is making circles. He made circles around the screws that held the dash in with no mistakes, no wipe offs, no redo's at all. He was just an amazing talent.

After the excitement of meeting what I considered a legend, the trip home was uneventful. Once again, the trailer followed along with no issues and we hauled ourselves back to the Northwest.

The trip wasn't actually over though and it did prove to be eventful before it was all over. In the aftermath of that fun trip, I unloaded the coupe off the trailer. It still had slicks on it and the street was damp from an earlier rain. As I left the trailer and turned the corner of 38th and South Tacoma Way, the boys from the auto parts store were out front and so I decided to show off. I fishtailed and wound up with the left front tire over the concrete divider into oncoming traffic that had to swerve out of my way. I ended up far enough over that the left rear tire caught on the concrete and sheared the pin off through the center of the rear spring leafs. The whole stack of springs unstacked and the rear end came out from under the car just enough for the right rear fender to fall down and cut a groove in the slick.  That pulled the quarter panel out at the bottom.

Well, it wasn't pretty and I had to borrow a floor jack to get it all back under the car so I could drive it around the corner to a temporary repair spot and get everything back in its approximate place to make it drivable enough to get it out to my shop and not feel like an idiot. That was actually the hardest part. Of course, any time you say "Watch this..." and your friends are watching you just know it spells trouble and nothing good is going to come from it. In the end, it could have been a lot worse.

Sadly, Ed "Big Daddy" Roth is gone, but I still have the coupe and many fond memories of one of the most creative people I've ever met. Thanks for the good times, Ed!