In his own words, Rick shares the story of his
"High School Sweetheart", a 1953 1/2 Ton Chevy Pickup. 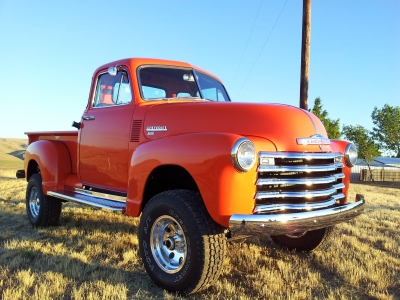 This is my high school sweetheart after being restored a second time due to carburetor backfire in 1998. I originally did a frame up restoration back in 1988. While being stripped apart, I came across a 1950 5-window cab and decided to use it as I liked the driver side vent, along with the wing windows. I also decided to convert the truck to a 4x4 using a 1966 1/2-ton closed knuckle front end, shortened on the left side 3.5" to match the original frame spring width. While I was at it, I added power steering.

Prior to when the carburetor fire struck the old girl, I drove the truck as a daily driver. After the fire, I parked the truck up the canyon on the family farm and it was in January of 2012 that I decided to strip her down and do a full blown frame up restoration AGAIN.

The engine is a 350 SBC with a 465 tranny and 221 Rockwell transfer case. The rear differential is a 12 bolt 3.73 posi-traction and the front is a Dana 44 with 3.73 limited slip, which have all been rebuilt. I upgraded the front again with a newer Dana 44 with open knuckles and disc brakes, as I upgraded the brake system to power brakes. 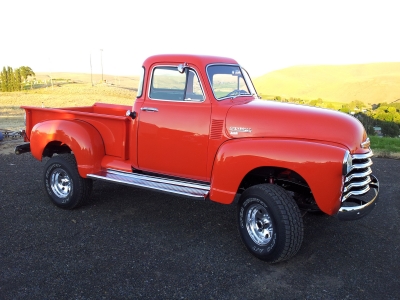 The color of the truck is HUGGER ORANGE. I bought a totally new bed with wood and stainless hardware from Mar-K products out of Oklahoma. I also bought new front and rear fenders. Every nut and bolt has been changed out and all the original parts have been bead blasted, primed and repainted or powder coated. There's a new wiring harness & Dolphin gauges, along with a newer radio that fits in the original location. In addition, I upgraded the windshield wipers to electric. 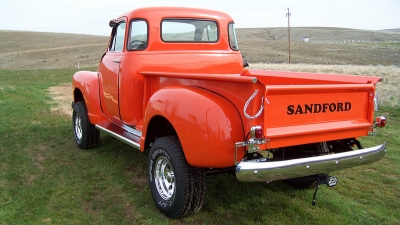 The truck was finished March of 2013. I took it to a local car show in July of 2013 and won first in its class & then the "KING of the BLUES", top dog as you will. That was the only show I took it to in 2013. This past year (2014), I have taken the truck to several more shows placing in almost all of them. This truck has been in the family since the 1960's and I plan on handing it down to my daughters.

CLICK HERE to view the pictures of the restoration, car shows and trophies!