Books 1, 2, and 3 from The Old Car Nut Book Series are available
for purchase on the David Dickinson Author Page

One late spring day in the late '50's my best friend, Buddy, and I were told to sit down in the living room of his house. Something of a challenge and an ultimatum was laid out to us. His Dad flatly stated, "You guys are screwing up by not making much effort in school and I want you both to get more serious!" I practically lived at their house and was treated like a second son. My folks had divorced four years earlier, so I had a stand-in Dad. Buddy was a year ahead of me in school and would start his senior year that fall.

After the usual words of advice about performance and diligence came a huge, but wonderful, bombshell. Buddy's Dad said, "Son, you bring your grades up to a low 'B' and graduate with your class next year and (to me) you bring yours up to a 'C+' and Buddy can have an older car of his choice, at my expense, as soon as the diploma is in hand."

We both thought this promise was bogus, but after repeatedly having the offer reaffirmed that summer, we bought into it.  We were lower middle class economically, so car dollars were not easily found. This was indeed a "BIG DEAL"!

We made good. Both of us got our acts together and buckled down; nose to the grindstone, studied hard, did every homework assignment, and worked with and for each other toward the goal of getting the car! My buddy did graduate right on time the next spring, and I got my G.P.A. up to the required mark. We struggled at first, but it got easier through doing and we got as close as two brothers could be through the process.

Buddy and his Dad, and yes I was included, started car hunting on his Dad's next day off. Of course, we two boys had been hunting all the used car lots for about a month, so we had a good idea what and where the "cool" rides were. After looking enough in enough car lots to satisfy his Dad's need to feel he got the best car for the price, we settled on a used five year old Mercury Monterey Sun Valley hard top with the glass roof in a beautiful two tone green. It had all the bells and whistles that a teen could want with the OHV V-8, three speed, radio, and fender skirts. We were in Seventh Heaven and riding on Cloud Nine! 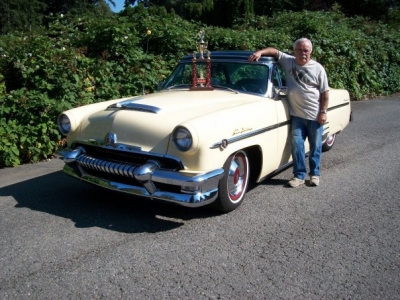 The deal was made on a Saturday, so we picked up the car and took it home on the following Monday. We washed and shined, until we had it absolutely sparkling. Our summer of a lifetime had started. We, of course, didn't realize the significance of that moment in time then. What kid thinks past today or at best tomorrow? Buddy's Dad covered the cost of the car and three months of insurance, but left it to us to figure out money for gas, oil, and whatever else we needed money for. We scouted out a half dozen lawn mowing jobs and used an old reel style, muscle powered mower to accomplish the work. We did a lot of pushing! We also had a morning paper route and along our path picked up beer and soda bottles for deposit returns. We made it work and two happier guys never existed.

We cruised all over the Greater Puget Sound area from our home base in North Seattle. This was all before Interstate 5 so it took hours to get to Silverlake or Norm's Resort in Woodinville. A trip out what is now Interstate 90 across the floating bridge to Lake Sammamish or Carnation was a real day trip back then. Oh, the freedom to be goofy kids, just laughing and fooling around. It was glorious.

The end of summer came all too soon and now the word was "get a job" for Buddy and "back to school" for me. All car insurance and expenses became ours plus board and room! We were systematically being led into adulthood by our guardian and mentor.

Buddy decided to enlist in the Army. This was still a time when every red blooded kid was patriotic and believed that America, right or wrong, was worth serving. He came home from Boot Camp in late December and we spent, what turned out to be, the last days we would have together. We spent cold nights sitting in that old Merc with the radio on, listening to Al Cummings on KJR 95 AM, of course.

A couple of months later, I just grew tired of trying to go to high school and work a thirty hour a week part time job to pay for room and board, so I dropped out of it all and joined the Navy. This was back when high enough entry scores got you in without a diploma. Buddy and I stayed in touch through letters, though not as often as we should have. He was in a unit on Okinawa and I was on an old fleet oiler out of Long Beach, CA.

The following spring, I got a letter from Buddy's Mom. She had delayed writing the letter, knowing how hard I would take it. That letter told me Buddy was not coming home. I still have the short note with its tear stains, both hers and mine.

As the years passed, I exchanged letters with Buddy's Mom. His Dad had passed away in his sleep and his Mom went to live with a sister, and the old "Memory Maker Merc" was sold. I raised a family, had a career, and finally had the funds to get serious about finding a car like the one in which we shared so much living, laughing, and loving. Yes, girls had been a major part of our summer. I spent months searching the web, digging through magazine ads in Hemming's and contacting the International Mercury Owners Association without luck.

Then, about six years ago, the perfect car magically appeared right here in Everett, WA at the Spring Car Show. To my wonder and amazement, it was for sale. Needless to say, I struck a deal and made this '54 Sun Valley my baby. It is nearly identically equipped. My Sun Valley has overdrive and is yellow and green instead of that two tone green. But now, over fifty years later, while Buddy is gone he is not forgotten and never will be. Buddy not only lives on in my heart and mind; he rides with me every time out. 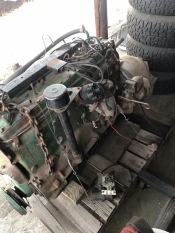